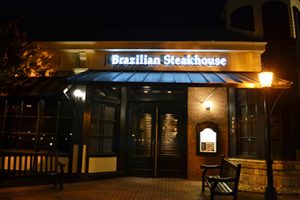 On Sunday, July 16 members arrived for the pre dinner reception at one of Napa’s newest and popular restaurants, Galpão Gaucho Brazilian Steakhouse. It is a Brazilian steak house restaurant that offers a variety of salads, vegetables, meats, fish and poultry.

Small bites were served during the reception with 2013 Beringer Private Reserve Chardonnay.

Dinner followed with a trip to the huge appetizer, vegetable and salad bar with a variety of items too large to describe that satisfied everyone’s tastes.

Multiple servers then arrived with various cuts of meats on swords cutting slices that each attendee desired. Multiple potato and vegetable dishes were also served along with chicken and salmon for those who did not prefer meat. Everyone was provided with a card and when it was turned to the green side servers arrived to slice more cuts of meat.

This was a truly unique and fun dining experience that was enjoyed by all. The restaurant staff were terrific and they made sure no one left hungry. Board member Ron Schneider was responsible for organizing this fun filled evening.